Facades play an important role in how the building is being perceived from outside. Being an integral part of the overall design, facades give architects the opportunity to create a unique personality for the building. Apart from attracting people by being aesthetically pleasing, facades can unlock a multitude of opportunities with innovation in ideas, correct use of materials and techniques. With cloned building at every nook and corner, below are a few examples of facade design that are unique and provide innovative solutions.

This office building, designed by Manuelle Gautrand Architecture, is located on Avenue Friedland, in the immediate vicinity of the Arc de Triomphe and Place de l’Etoile. With an aim to create a distinct mark on the urban fabric by taking advantage of surrounding views and natural light, the architects designed the facade using glass, partially covered with a second-skin of screen-printed marble pattern. Based on the Origami arrangement, the delicately folded marble panels express elegance and modernity and can be enjoyed both from outside as well inside of the building.

The University of Aberdeen Library, UK

Standing as one rectangular volume of 10-storey in the Aberdeen sky scape, the library building designed by Schmidt Hammer Lassen Architects, is an example of visual lightness. The clean lines coupled with great proportionality and material palette gives the building a timeless quality. Consisting of an irregular pattern of insulated panels and high-performance glazing, the façade will shimmer during the day and glow softly at night. Apart from acting as a luminous landmark for Aberdeen, the building is also designed to serve as a climate buffer, changing in response to specific qualities of light or images projected onto it.

Designed by the California-based architectural practice Faulders Studio, the GEOtube tower is a 43-story iconic tower proposal for the city of Dubai. Born from unique environmental conditions, the GEOtube Tower is a new kind of urban sculptural icon, which is based on the Vertical Salt Deposit Growth System. Conceived as a refuge for local wildlife, the building uses water from the adjacent Persian Gulf, which is sprayed onto the mesh of the superstructure using a gravity fed system, allowing the external skin to continually grow. The highly saline water would eventually evaporate leaving the salt deposit. Its skin will continue to “grow” through salt deposits as long as water is supplied to its surface. It’s in continual formation rather than fully completed. 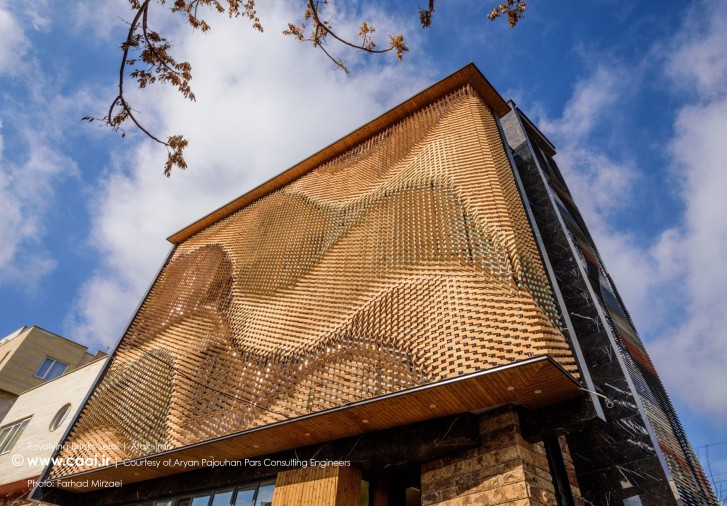 Located in the residential neighborhood of the city of Arak, the design of the office building attempts to complement the urban fabric as well as create its own unique identity. The office building is designed by Aryan Pajouhan Pars Consulting Engineers with Farhad Mirzaei as the architect in charge. Based on the parametric design, the facade breaks the monotony and stands out for its simplicity and creative thinking.

The university building in Kolding, Denmark, designed by Henning Larsen Architects, features a climate-responsive kinetic facade. The building with its distinctive isosceles triangular is aimed to set a benchmark for green design. The solar shading system that gives the building its form, comprises of approx. 1,600 triangular shutters of perforated steel. The perforated metal sunshades are mounted on the façade in a way which allows them to adjust to the changing daylight and desired inflow of light.

The Gabriela Mistral Cultural Center is designed by Cristián Fernández Arquitectos, Lateral Arquitectura & diseño. Through the innovative facade system, the building achieves different degrees of transparency that gradually goes from the wide open and transparent to the totally opaque and closed. Used in its varied forms such as perforated, smooth, folded and standard, the material weathering steel, creates an immediate visual link between past, present, and future.

The Pure spa, designed by MIA Design studio, is an oasis of tranquility. A series of lattice screens combined with climbers shield the building’s glazed facade from the strong tropical sunlight and keeps the building cool. The lattice screen casts dappled light onto the building’s internal spaces and creates a dramatic effect. The careful allocation of local plants along with the pleasant play of light and shadow on the textured walls invigorate the senses and create a healing environment.

Kolon One & Only Tower, Seoul

The Research and development facility for The Kolon Group, the leading textile manufacturing company in South Korea, is designed by the Morphosis Architects. The building is famous for its visually striking façade that demonstrates Kolon’s commitment to innovation, technology, and sustainability. The distinctive brise-soleil system on the façade is both a performative and symbolic feature of the building. The façade units have been parametrically shaped to balance shading and views, and are made from a GFRP formulation that uses one of Kolon’s own high-tech fabrics, Aramid, to dramatically increase the material’s tensile strength.

The Institute of Science and Innovation for Bio-Sustainability, Portugal

With an aim to break the existing grey monotony of the campus, architect Cláudio Vilarinho decided to develop a building that intentionally stands out through its distinctive color and facade treatment. Inspired by the tubular molecules that form solar panels, the facade comprises of irregularly shaped prefabricated panels. Pale green in color, the panels are cast from a cement-based composite material that incorporates microfibres to give it added strength. This visually pleasing skin allows the inclusion of pigmentation/oxides, doesn’t need constant maintenance and lasts longer than common materials.

Designed by the Danish architectural firm SLETH, the office block with Cracks in the concrete facade comes across as one of the unique new-age facade solutions. The sparsely spaced cracks aim to strengthen the connection between interior and exterior spaces by providing glimpses of the building’s illuminated interior. The project combines reused concrete from the site’s former cheese storage facility with robotic technologies to create the visually striking illuminated concrete facade, which helps the building integrate with its aging post-industrial setting.